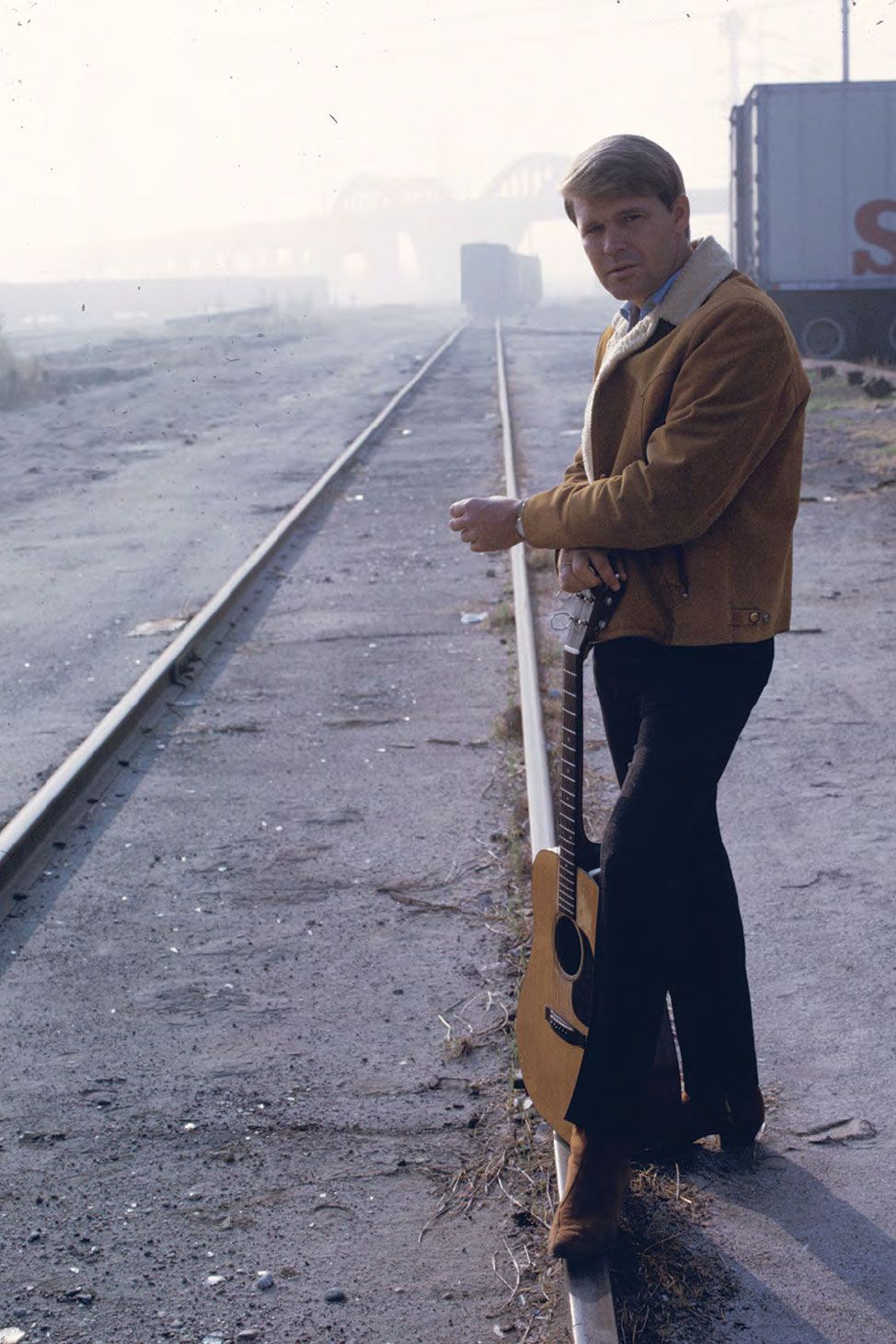 Glen Campbell has always felt a divine touch in his life, as if he were given a gift he didn’t earn, but was allowed to use to make people happy and forget their worries for a time.

How else do you explain his life, one of the most extraordinary rags to riches stories in popular music history? The 12th child and seventh son of a dirt poor sharecropper born in the depths of the depression on April 22, 1936, Campbell drowned when he was a toddler in the Little Missouri River near his family’s Arkansas home. His lips were blue when he was pulled from the river and those who rescued him believed he was gone. But he lived miraculously after his brother Lyndell resuscitated him, and Campbell always suspected it was because of this gift.

It wasn’t long after this that Campbell’s father recognized his talent and bought him a $5 guitar from Sears & Roebuck at the age of four. He quickly showed himself to be a prodigy under the tutelage of his Uncle Boo. How could the two not be related? For it was clear Campbell was a special talent, so much so that he broke the poverty cycle and began to earn a living with his guitar as a teenager and went on to become one of the most respected, revered and popular performers of the rock ‘n’ roll era.

From his time as a groundbreaking musician for Elvis, Frank Sinatra, The Beach Boys and many others in the archetypical backing band The Wrecking Crew to his decade atop the charts to the grace he showed as he closed his career while fighting Alzheimer’s disease, there are few artists who have touched as many lives as the Rhinestone Cowboy. And left them smiling.

By the time Campbell won his sixth Grammy Award in 2014 for his final recording, “I’m Not Going to Miss You,” he had won most every award and achieved every milestone available to musicians. One of the best-selling solo male artists in U.S. chart history, Campbell released more than 70 albums, selling 50 million copies with more than 80 songs charting. He is a member of the Country Music Hall of Fame and the Musicians Hall of Fame. He won the Country Music Association’s Entertainer of the Year, twice won the Academy of Country Music’s Album of the Year award and was named Male Vocalist of the Year by both. In 2012, he was bestowed the Grammy’s most prestigious honor, a Lifetime Achievement Award.

Campbell made history in 1967 with his first Grammy wins by sweeping the song and performance awards in both the pop and country and western categories. “By the Time I Get to Phoenix” won the pop accolades and “Gentle on My Mind” took the two country and western trophies. Those two songs and “Wichita Lineman” are in the Grammy Hall of Fame.

The inability to define his sound marks Campbell’s career. Campbell was the rare artist whose success had no fences. He grew up loving country music, but Campbell made sophisticated music that connected with Americans making the physical and cultural transition from a rural agrarian society to a modern urban one. He also brought that love for the genre to new fans, who embraced it and helped move what was once a regional sound into the pop cultural conversation, sparking an interest in all things rural to an adoring international audience.

Campbell had little interest in the rural experience, however, growing up in Billstown, Arkansas, a community so small it didn’t merit inclusion on any map. He began to see a way out of the hard-scrabble sharecropper’s life when he brought his guitar to school in kindergarten. At recess he noticed how his classmates – and especially the girls – would gather around when he played. Could picking the guitar be more lucrative than the endless toil of picking cotton and corn?

His love of music – all kinds of music – drove him. When he heard the gypsy jazz guitarist Django Reinhardt, he was entranced. His father loaned out his services to an elderly neighbor woman who needed his help with chores and milking cows. Young Glen was not to accept payment, but once in a while the woman would slip him a few coins. When Glen was eight, he used that money on Django records and played along with them until he could mimic Django’s virtuosic style. It was like this with record after record.

With family resources sparse and opportunities non-existent, he left Arkansas at fourteen years old and joined a migrant labor crew to pick tomatoes with the mostly Mexican laborers. He was in Indiana when he got the call to join his Uncle Boo and travel out west to chase the dream of a musician’s life. The two eventually settled in Albuquerque, New Mexico, in the early 1950s where Campbell appeared on local television and radio and eventually formed his own band. A bustling regional hub that was a stopover between the popular Texas and California markets, Campbell quickly got notice in Albuquerque as a bandleader and fill-in sideman and didn’t take a lot of convincing when those passing through said he should make the long drive to Los Angeles.

He arrived in 1960 at a glorious time in pop music history and within a year got a publishing company job writing songs and recording demos. His demo work led him to his job as a guitarist in The Wrecking Crew, the group of studio musicians who worked with Phil Spector to create his influential Wall of Sound production style. His work during this period would have been enough to secure his place in rock history. Alongside musicians like Leon Russell and drummers Hal Blaine and Earl Palmer, he played on an astounding 586 sessions in 1963 alone. That’s him creating unforgettable guitar parts on the Beach Boys’ landmark Pet Sounds album, Frank Sinatra’s “Strangers in the Night,” the Righteous Brothers’ “You’ve Lost That Lovin’ Feeling” and the Monkees’ “I’m a Believer,” not to mention hits by Elvis Presley, Bobby Darin, Lou Rawls, Ricky Nelson, Merle Haggard and Bobby Vee. And you’ll also find him among backing a who’s who list of artists with the Crew as the house band on the legendary “T.A.M.I. Show.”

After working with the Beach Boys on Pet Sounds, he was asked to join the band as a touring artist in 1964, playing bass and singing harmony for Brian Wilson after the legend temporarily retired from touring. These times were some of the best of Campbell’s life, with the happy memories surviving even the ravages of Alzheimer’s five decades later.

At the same time Campbell also was recording as a solo artist. His single, “Turn Around Look At Me,” released on a regional label, caught the attention of Capitol Records, which signed him in 1962. He soon released his first modest hit, “Too Late to Worry, Too Blue to Cry.” His first album, Big Bluegrass Special, recorded under the name The Green River Boys featuring Glen Campbell, yielded the Top 20 hit “Kentucky Means Paradise.” In another important development, he began making appearances on musical variety shows such as “Star Route,” “Shindig!” and “Hollywood Jamboree.”

Capitol paired him with producer Al De Lory in 1967 after a few years of sagging sales and the singer soon went on a run of hits that would announce his presence to the wider world. “Gentle on My Mind,” released later that year, and “By the Time I Get to Phoenix” were instant successes and the album, By the Time I Get to Phoenix became the first country album to win top honor Album of the Year at the 10th Annual Grammy ceremony in 1968. “Wichita Lineman” and “Galveston,” which like “Phoenix” were composed by Campbell’s spiritual brother Jimmy Webb, also were huge multi-genre hits in the late 1960s.

Campbell’s success helped him cross over into a new arena – television host. “The Glen Campbell Good Time Hour” ran from 1969-72. The episodes were aired in Great Britain, Australia and Singapore by the BBC along with five specials for the network, giving Campbell a truly international presence and catapulting the singer to worldwide stardom. Using his industry connections, Campbell landed some of music’s biggest stars – from The Beatles to Johnny Cash – and introduced the world to country music in a respectful way that highlighted lesser-known musicians who would go on to wider acclaim. He also moved into the film world as the hand-picked co-star of John Wayne in the film “True Grit,” and his song for the soundtrack was nominated for an Academy Award. Campbell was also nominated for Most Promising Newcomer at the Golden Globes.

Campbell would conquer pop music again in the mid-1970s when he released his best-selling single, “Rhinestone Cowboy,” a signature song that became his theme in many ways. The 1975 single, which has sold more than five million copies, remains a standard of the era. And in 1977 he released “Southern Nights,” a remake of Allen Toussaint’s classic. The song reached No. 1 in three categories and was the most-played jukebox track of 1977.

As with most pop stars, Campbell remained a popular figure, continuously touring around the world, but would drop from the top of the charts. Over the ensuing years he publicly overcame alcohol and cocaine addiction – outlined in his 1994 autobiography “Rhinestone Cowboy” – while raising three young children with his fourth wife, Kim, who introduced him to Christianity in the early ’80s and helped get him sober. Throughout the next two decades, he released a resounding 20 albums in the 1980s and ‘90s, occasionally rising to the top of the country charts with songs like “Still Within the Sound of My Voice” in 1987 and “She’s Gone Gone Gone” in 1990. During this period Campbell began to release albums of Gospel music, adding three prestigious GMA Dove Awards to his treasure chest.

Campbell returned to the spotlight with 2008’s Meet Glen Campbell and released the extremely personal song cycle Ghost on the Canvas in 2011 at age 75. A short time after recording that album, Campbell was diagnosed with Alzheimer’s disease, a debilitating brain disorder that slowly robbed Campbell of his memories and abilities.

He nevertheless launched “The Glen Campbell Goodbye Tour,” with his children becoming key members of his band. A film crew led by filmmaker James Keach followed Campbell for a portion of the 151 sold-out shows as he navigated the disease. The resulting documentary, “Glen Campbell: I’ll Be Me,” was hailed by critics and yielded the singer one last Grammy, Best Country Song for his final release, “I’m Not Gonna Miss You,” and a second Academy Award nomination.

It was a fitting coda to a career that spanned six decades, touched tens of millions of lives and felt blessed every step of the way.

Country Music Association Awards
1968 – Entertainer of the Year
1968 – Male Vocalist of the Year
2017 – Musical Event of the Year, “Funny How Time Slips Away” with Willie Nelson